...since I last posted? Where has my brain been? On hiatus obviously? What has occurred over the past week and a half? Quite a bit.

Of course there is the usual After School Tutoring, Child Taxi-ing, and Saturday Schooling all on top of my own dance classes. I am still living in the "fly-by-the-seat-of-my-pants" mode which I have told myself I wouldn't do anymore. Old habits die hard.

I don't believe too many super-memorable worth-mentioning things happened from from the 6th until the 13th, but Friday the 13th was a bonus day! My students had a Valentine's Day party. The student council sold candy grams of which I got EIGHT!!! When I got home, my husband showed me a package I had gotten in the mail and a slip for another package that was waiting for me at the post office. I immediately tore into the package which had been tightly wrapped and taped. It was almost as hard to get into as Fort Knox. When I finally made it through the last piece of paper, I discovered two lovely travel books from my friend Jobo in Norway - one of which I have already begun dutifully marking up in preparation for the trip Peggy (Miruspeg) and I are taking to Norway next summer (2010.)
After recovering from the surprise of the first package, Caitlin and I drove to the post office and signed for the next parcel. On the way back to the car, I couldn't resist tearing into it like a child on Christmas morning. I didn't even leave the parking lot. I sat down and began pulling out the treasure trove of goodies that Peggy had sent from Australia. Caitlin's eyes were immediately drawn to the cool pens and flip flop magnets. I pulled out the loveliest address book ever. There were photos of the indigenous people of Peru. This is probably one of the best gifts a friend has ever given me. Although it's almost too pretty to write in, I can't wait to start putting phone numbers and addresses in it. 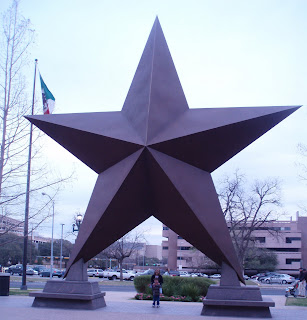 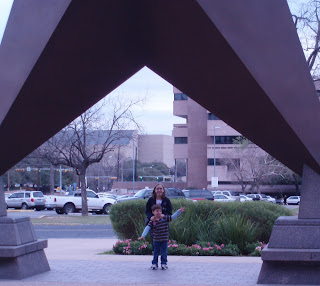 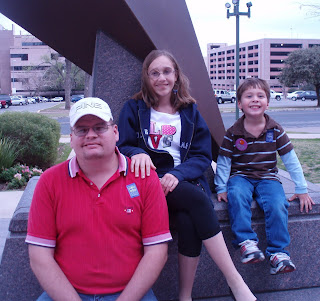 Valentine's Day, Gary and I took the kiddos to the Bob Bullock Texas History Museum to see an IMax Movie and the Spirit of Texas Show along with the regular museum exhibits. It was so cool to see everything I teach in Social Studies standing in front of me life-size. It was like walking through the textbook. This was all followed by a nice dinner out. It was nice to be out with the entire family.

The next day was spent casually lounging around until Caitlin broke her front tooth. I was so upset because she did it in such a silly way - trying to peel the glue off the bottom of a bottle of body wash that was glued to her Valentine's Day gift basket. All I could do was pray the dentist was open on Presidents Day, which he was. Unfortunately, the receptionist couldn't find an opening, so Caitlin had to go to the dentist today. Note to self - when Gary's insurance re-enrollment comes up again, hound him until he gets DENTAL INSURANCE!!!!

Well, that's about it. Tomorrow is already Wednesday. The week's half-way over!! Aren't four day weeks the best?!
Posted by McMGrad89 at 2:17 PM

Hey Annemarie! I didn't know you had a blog too!!!

We are hoping to make it to the Bob Bullock Museum in a couple of weeks, of course if we make it ti Austin it will e for basketball and that takes up soooo much time! We drove past it several times last year but never made it inside.

Just popped in to say thanks for the embossing power tip on my blog. :)

The museum sounds like a great place to visit....I'd love to see it when I am in Texas.

Pleased you enjoyed the address book. I bought it from a friend who is the fundraiser for the Sisters of Mercy here in Australia. They do alot of work helping out women in Peru.

Hope Caitlin's tooth was toooo expensive to repair....although if they charge do in Australia you will have to get a third job!

Of course I meant NOT too expensive!

We will definitely go to the museum. The tooth was quite high.

So sorry, I don't how "toughters" came up... Your doughters tooth, of course..

Really nice to see your family!! But I am sorry to read about your doughters tooth.

How fun to get gifts unexpectedly, and how awful about Caitlin's tooth. I hope she's okay now.

I think it's wonderful that you and Peggy are planning a trip to Norway next year. How fun! Maybe you can stop by for a visit here??

So sorry about the tooth--Yikes! My mom snapped one of her front teeth while trying to open a sunflower seed--isn't it weird how sometimes the slightest thing can do something like that?

Glad you had such a sweet Valentine's Day!

Poor Caitlin! I wouldn't have thought a tooth would break so easily.

Your Valentine's Day sounded lovely! I agree that there's something nice about a family event! We went to 1/2 a concert today (classical music); K and N were quite well-behaved but we didn't want to chance a second portion of the concert!