This summer found me being a bit lazy, especially because I was on vacation for three weeks and my youngest was away for three weeks. So imagine six weeks of not cooking when the little one asks, "What's for dinner?"

James's favorite dinner is spaghetti. I usually keep ground beef, pasta and sauce on hand as a go-to because I know it is something he will he eat.

The other day Cait and I went to Sam's Club and bought a big box of spaghetti and a four pound package of ground beef, but I didn't bring home any sauce. My go to is Hunt's Traditional spaghetti sauce. It's inexpensive. It can be used for pasta, lasagna, meatball subs and many other things. However, when James said, "Spaghetti," my mind did a mental inventory and realized I had none. So what's a mom to do? Improvise.

I have never made spaghetti sauce from scratch but could imagine what would go in it. Here's what I came up with.

I found two small cans of tomato sauce (a staple in a Puerto Rican household), an onion, garlic, a random jar of roasted red peppers and regular seasonings. I asked Cait if she had remembered to divide the ground beef into one pound packages, but she didn't so we had to deal with a four pound frozen lump of beef. Somehow she managed to break the block into four even sections that she placed in freezer bags and placed back in the freezer. The pound that we needed was still frozen solid and it was suppertime, so we put it in the five quart pot with a quarter cup of water, turned the pot on medium and covered it. It wasn't long before the meat was cooked and Cait broke it up into large crumbles.

Normally, I would sauté the onions and garlic first and then add thawed ground beef and seasonings. So if you have thawed meat, try it that way. It will give the meat more flavor.

After the beef was browned, I put in the rest of the ingredients but found it was a bit acidic so I added a tablespoon of sugar. Caitlin tasted it and liked it so I decided it was good to go. 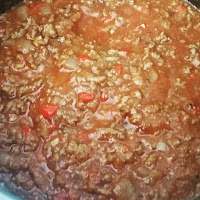 Cait cooked the spaghetti noodles to al dente, drained the noodles and put it back in the pasta pot. I scooped some sauce on the noodles and mixed it together. James ate it that way, and I served Cait and me with some more sauce on top. 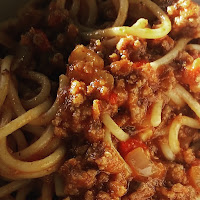 For having never made my own sauce, I am pretty darned impressed as was James. I may be done using store bought sauce. Try it out and let me know what you think. 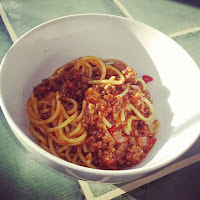 *The oregano I used was Mexican oregano because that's what I had.
** I had a jar of roasted red peppers in the pantry so I used one whole pepper from the jar.

Once the meat is cooked throughly, stir in the chopped roasted red pepper, tomato sauce and sugar.

Simmer while you cook the pasta of your choice.

Mix the pasta and the sauce and serve.