A Picture's Worth a Thousand Words

They say a picture is worth a thousand words. I guess that's so. When you look at photos taken by Ansel Adams or Annie Liebowitz, they definitely tell a story. The only difference between your photos and photographers like these two is you may never see yourself in a museum or on the cover of Rolling Stone magazine. That doesn't diminish the stories that your photos tell.

Take for example this photo that showed up in my newsfeed today. What do you see? 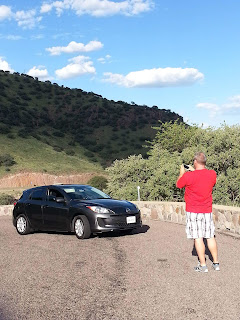 The man was my Sweetie Bobby. He would have turned 50 on Monday.

The car was his pride and joy. There was a carwash near his house that offered a rain check up to three days after your first wash. He used that raincheck and would upgrade to a full wash every time. When asked what kind of air freshener, he would always get New Leather. He took very good care of it, making sure to get the oil changed as directed and rotating the tires regularly. He needed to do this because his job had him driving long distance, and every three weeks he drove nine hours through the West Texas heat to see me.

In addition to the car, I see plaid shorts and gray trainers. He was a khaki pants, "dad jean" wearing kind of guy. He felt dressed up if he wore Dockers deck shoes. Bobby let me dress him, choose his clothes and even his shoes. So when I see those plaid shorts, I smile because it shows how much he valued my opinion.

Another thing I notice are his calves. When he would go to the gym, he would get on the elliptical machine and bang out the miles. He would call me after the gym and rib me about how many calories he had burned. Bobby also learned about spin class at the gym. There was something about the loud music and frenetic pace that grabbed his attention.

You may notice he is taking a picture. It was probably with an iPhone. That man loved technology, especially his Apple products. I once converted him to Android but it was short-lived. When the next iPhone came out, he immediately switched. His dining room was not a dining room. It was his technology center where he took apart computers or experimented with Raspberry Pi circuits.

Lastly, you will see that this photo was taken in the mountains. Bobby loved the outdoors, camping with his youngest and traveling. This trip was to the McDonald Observatory in the Davis Mountains. When the instructors taught about the planets, stars and satellites, Bobby was all ears. As we left, he was already talking about the next time.

So I challenge you. Find a photo you haven't seen for a while. Look at it carefully. What story does it tell you?
Posted by McMGrad89 at 8:45 AM 2 comments:

But You Are so White!

I've heard that many times in my life, and today wasn't much different.

It's actually a funny story. There is a girl who calls me mom. I never did get a chance to officially become her mom because Bobby and I never married. Nonetheless, LM is one of my children.

LM called me today while Caitlin and I were driving down the highway, and just like my other two kids, if she needs me, I'm usually going to do what I can for her. Her question was a funny one. "You speak Spanish, right?" Now the answer to that is a complicated one, but yes, Spanish words have been known to come out of my mouth. So I tell her I do and ask her why. Well, it seems while she was having a garage sale, there was a man there interested in buying a car she had. However, he only spoke Spanish. I tell her I am five minutes away and head over there instead of going to Hobby Lobby.

When I get to the garage sale, I introduce myself to the man who starts talking a mile a minute in Spanish. Uh oh! I give him my overwhelmed look, and he begins to slow down. I tell him what I can about the car, relay his questions to LM and her boyfriend R, and try to translate back to the man what R said. It's quite comical listening to me speak in Spanish at the level of a three year old because I clearly don't know how to say things like timing belt and battery. My Spanish is limited to asking where the bathroom or library is or telling someone that Juan is wearing brown pants. Nevertheless, we settle on a date for the man to come back and see the car when the garage sale isn't going.

As he and I walk away, he thanks me and wonders aloud how I learned Spanish. I explain that my parents are both Puerto Rican but I grew up here (Texas) to which he responds with the typical, "You're so white."

Growing up in America with Puerto Rican parents, I have learned a few things. 1) There are people of many races in Puerto Rico. 2) That seems to be the truth in any country. 3) Even Hispanic people can be ignorant to the fact that Latin American people come in many colors.

And this is why I gave this man my usual response. I nodded and smiled.

It's that time again, time to reflect on the past year and decide what kind of progress I've made. My word for the year was FORWARD. Even though I didn't write about it at all, I feel I have managed to move forward pretty well. But to see how I've moved forward I would like to take a look back - waaay back. 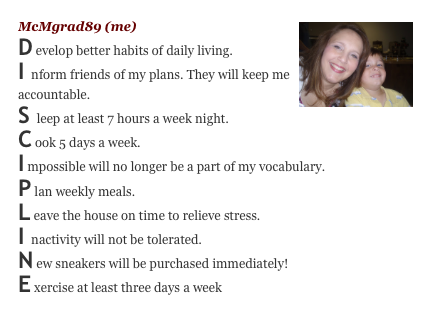 I said I wanted to develop good habits such as:

Did I? Not so much then, but I do many of them now  and I think that says something. It says you may plant a seed to something that may take awhile to grow but with patience you will see results, especially with periodic reflection on where you have come from.

The year 2012 found me looking to live more BOLDLY and boy did I. That was the year everything changed in a big way. 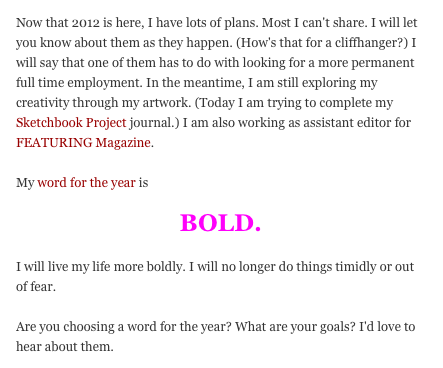 I went through a lot that year including moving out with my kids, moving back to Texas, starting a new job, and so many other things. 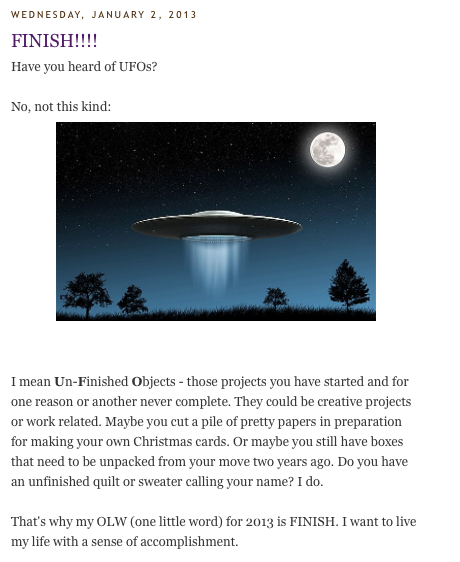 That has to be the funniest OLW ever. I still do't finish much - at least when it comes to crafty projects. I have a half painted bookshelf in the garage, an unpainted table in the garage and a table that needs to be repainted in the kitchen. I also have my feet propped on an ottoman that needs to be recovered. That's pretty much me - full of ideas that never get accomplished. In fact, I don't even think I even finished focusing on my OLW for 2013. Typical.

So this leaves me with 2015's word FORWARD  where I said:

The word FORWARD makes me think of this little clip from Meet the Robinsons:

Growth mindset is what we teach our students at my school. When you fail, you keep moving forward. So thinking about this concept leads me to my word for 2016.