I live in a very strange place as many of you know. I drive through field artillery ranges that have free range cattle roaming through it. There have been more than a few times when I have had to stop to let a cow wander across the road. I was fortunate enough to have my camera and the time to stop to snap a picture. 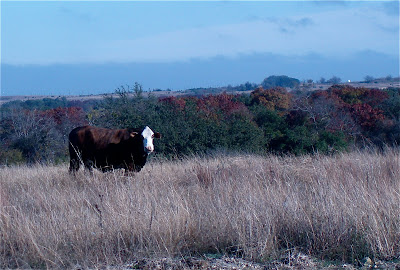 Today was Caitlin's band concert. Five junior high bands, some better than others, played their way through some traditional and not so traditional Christmas tunes the oddest being what the band director described as a Puerto Rican tune entitled "Winter Fiesta." What would my Puerto Rican counterparts know about winter other than it begins December 21st? When my grandfather came to visit me in Alaska in 1973, he had never seen or felt snow before. I know that the information superhighway has made such knowledge available to anyone with computer access, but really! How could they write a song about a Winter Fiesta?

But I digress, as I am prone to do. The next photo is of the tree that was displayed at the concert right next to Lone Star Flag. 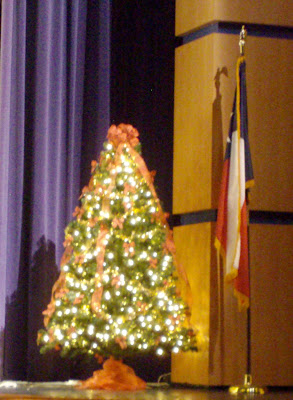 Well, I am one-fourth of the way through December. I have managed to keep up pretty well. Just three more weeks of December Dailies.
Posted by McMGrad89 at 10:40 PM

you did a great job, so far. Just 3 weeks left. We will manage to keep up. And a winter fiesta, i don't mind. I do not like dutch winters with al the rain and grey days. I hope there will be some snow this month. Would be nice for a nice winter photo.

Since I can't keep up with anything, I appreciate today's two-fer! Lovely tree and quite cute cow! Winter Fiesta, by the way, sounds especially nice today with our high in the 70s.